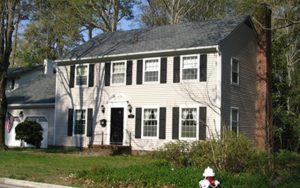 The following case study is another example of how Americans spend a fortune on disposable roofing (asphalt shingles) instead of permanent roofing like much of the rest of the world.

Mrs. B in Hampton, Virginia lives in a home built in 1938 by her in-laws. She and her husband moved into the home in 1955. On Saturday, February 21, 2015, I was at her home to price the sixth asphalt shingle disposable roof to be installed on her home (she has never used the same contractor twice). The Roofing Company had worked on her parents’ Buckingham Slate roof, which is on the home where she grew up in Newport News, Virginia.

The True Longevity of Asphalt Shingles

Unfortunately, asphalt roofing shingles are not designed to last. Even a perfectly installed asphalt roof with a good roofing underlayment and ventilation system will rarely last 20 years or more. Most roofs are not installed this way and, as a result, will last from 10-15 years. Often homeowners who try to save on a roof installation end up having to replace their asphalt roof in as little as five years! This is the reason why as much as 10 million tons of asphalt roofing shingles are removed from homes across the U.S. every year and dumped into landfills.

Engineers who manufacturer asphalt shingle roofs understand that “lifetime” shingles are only for the original owner, and since most Americans only stay in a home 13 years on average, they won’t be around long enough to collect on that warranty.

A Real-World Example of Durability & Longevity

A great example of why we recommend slate as an alternative to asphalt shingles is a home we recently worked on in Norfolk. The slate roof – a real Vermont semi-weathering gray/green – had fallen into disrepair. This is the same slate as was originally installed and it is still working after almost 100 years. Although we had to remove some of the existing slates to make repairs to the underlayment and valleys, we were able to later re-install that same slate, saving both time and money for the homeowner.

Interestingly, most slate roofs in Virginia are black Buckingham Slate, which has proven to last in excess of 200 years!

Before you assume that an asphalt shingle roof is the way to go when you need new roofing in Norfolk, VA, be sure to give The Roofing Company a call at 757-867-6600. We can provide you with a quote for a slate roof that will truly last a lifetime, saving you the cost of roof replacement many times over if you plan to stay in your home.